My cat is crazy, what can I do?

Thriving Cat > Behavior Problems > My cat is crazy, what can I do? 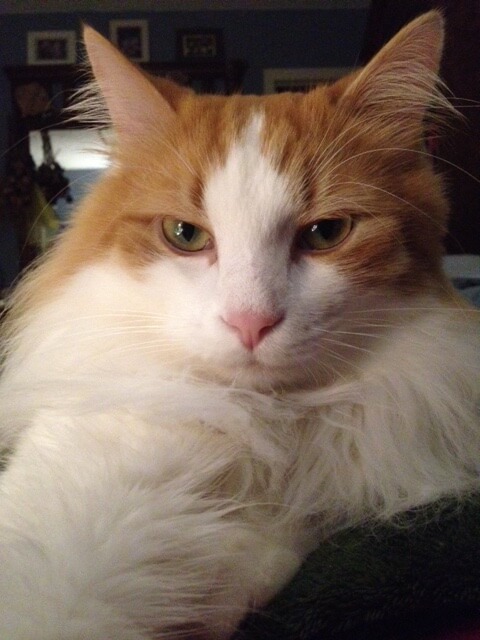 My cat Mouse started acting a bit skittish again lately. My husband commented that he probably needs a new pheromone collar as he usually starts getting paranoid when they wear out. I didn’t change it right away. That was a mistake. I should have taken action before something really went wrong. We have learned that some kitties are very dependent on their anti-anxiety aids. Mouse needs his. He starts acting like the Mr. Hyde to his normal Dr. Jekyll. So if you are thinking to yourself, “My cat is crazy, what can I do?”, read on.

Mouse was a pound kitty we rescued. He started out very shy and when he finally came out of his shell a bit, it was to skulk around acting annoyed at the world and peeing on things half the time and acting like a normal cat and following me around or sleeping on the bed the other half. It was so frustrating! He would pee on bath mats, throw rugs, door mats, clothes, shoes, in the bathtub…everywhere. He was jumpy and skittish. He would bite (though usually not too hard) if he didn’t want to be touched. He would bite harder if I tried to get mats out of his fur.

We discovered the miracle of pheromone diffusers, collars and Spirit Essences Safe Space for Cats drops that go on his fur. With the collar and the drops he is a whole new cat! He is sweet, happy, affectionate, calm and doesn’t pee outside the box! It is amazing how well they work.

So recently when he started acting a little jumpy I should have taken heed. I didn’t. I went into the bathroom the next day and saw a huge puddle of pee on the bath mat. That hadn’t happened in ages. I instantly realized he needed a new pheromone collar. The problem is that he is a bit difficult to corner when he needs a new collar and doesn’t want to be caught. I have locked him in the bathroom to change it before but due to the recent pee incident I knew that would be a bad idea since he was already guilty about it and would freak out in there. I thought I would be sneaky and slip a new one on him while he ate. I put out new, wet food for all the cats and slipped a new collar on over his head from behind. That was a mistake. I also hadn’t trimmed his claws recently. He hooked my finger like a fishhook. He only did it once and I think it was just an instinctual reaction to something going over his head unexpectedly. So I can’t really blame him! I knew I couldn’t let go of him though since he would run and hide under the bed. I wrestled him to a chair and managed to get the new collar adjusted and the old one off. He was mad at me but got over it and by the next day everything was back to normal. He was his sweet, happy self again.

Lesson learned. Do not underestimate the power of the pheromone products and Safe Space for Cats Drops. They keep my furry, buddy the sweet boy he wants to be and not the peeing, skulking, clawing Mr. Hyde of a kitty with anxiety issues.

I have mentioned this in previous posts, but make sure there are no medical issues that can be causing your cat’s peeing or other behavior issues. Medical issues can include diabetes, kidney stones and others. If those are ruled out and you are thinking “My cat is crazy!”, give these products a try. Here is a link to the products  that work so well for me.

Please leave a comment below if you use these or have any questions.